Bought a car? Got a cell phone? Been to the doctor? Got a job? Purchased products online? Have a credit card? You may be in for a very rude surprise. Chances are when you signed the contract, you surrendered your Constitutional right to take the business to court, no matter how many laws they break.

No matter whether they rip you off for $40 or $40,000. Even if they deliberately plot, scheme, and exploit their special access to your personal information to rip you off along with 3 or 4 million other customers -- engaging in a widespread practice of illicit conduct. That is because those contracts almost always contain "forced arbitration" clauses hidden in the fine print. 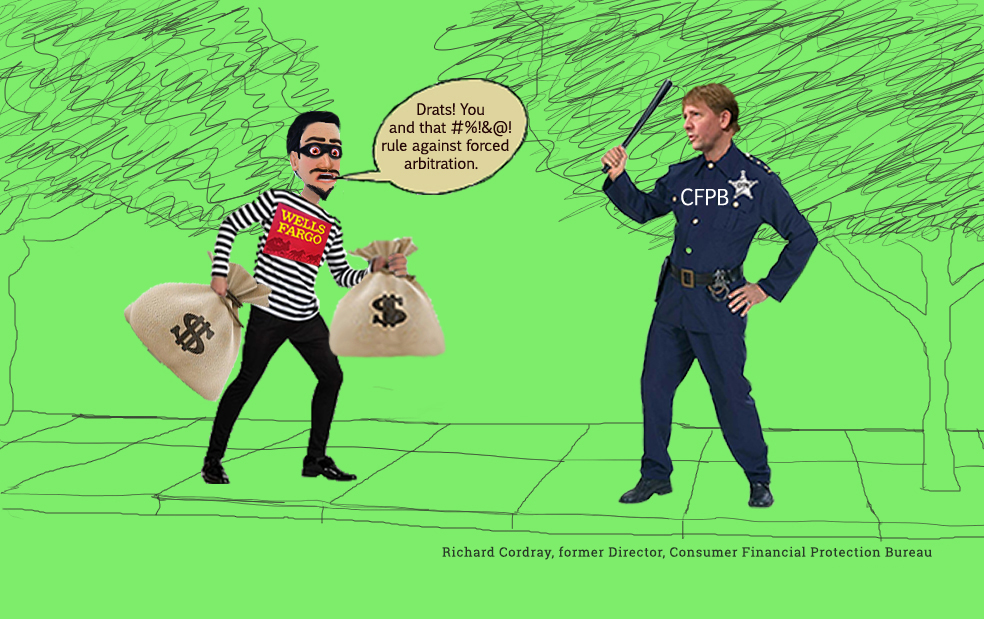 This is infuriating and downright Un-American. How can banks get away with it? President Trump gave them a "Get out of Jail Free" card by killing a pro-consumer rule issued by the Consumer Financial Protection Bureau, that was going to restore your right to haul wrongdoers into court and protect yourself from illegal activity such as identity theft, forgery, fake accounts, excessive overdraft fees, and other types of fraud. Not surprisingly, the new rule was attacked by Wall Street crooks and Republicans in Congress, who receive vast amounts of campaign funds from Wall Street. 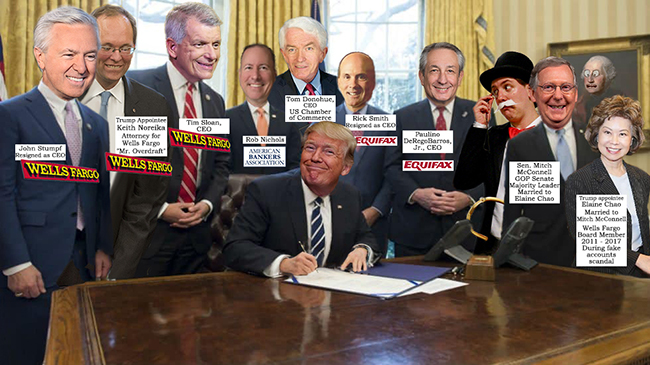 Trump signs anti-consumer Act, taking away Americans' Constitutional right to fight back in court against crooked banks that rip us off. The Act was backed by Wall Street and crooked banks like Wells Fargo. It was opposed by groups that represent millions of consumers and workers, plus faith-based organizations, and groups like the American Legion, that represent millions of active duty military Servicemembers and veterans and their families. Senator Elizabeth Warren (D-MA) championed the creation of the Consumer Financial Protection Bureau. The CFPB has forced crooked banks to return over $12 billion to consumers victimized by illegal practices.

"This CFPB rule will allow working families to hold big banks accountable when they're cheated and help discourage the kinds of surprise fees that consumers hate. In the upcoming months, the US Chamber of Commerce and other big business lobbying groups will go all out to get Republicans in Congress to reverse this rule, so Republicans will have to decide whether to defend the interests of their constituents or shield a handful of wealthy donors from accountability."
- Senator Elizabeth Warren


Not surprisingly, companies that commonly break the law LOVE forced arbitration. For example, Wells Fargo engaged in widespread identity theft and forgery, and made enormous profits from fake accounts set up without its customers' awareness or permission. Despite all the bad press, Wells Fargo refuses to free its customers from forced arbitration. Why? Because Wells Fargo would have to return vast sums to its victims if they could take the bank to court. Plus its victims could get their hands on incriminating emails and possibly win a permanent injunction that would forbid Wells Fargo to engage in the same illegal conduct in the future.

According to the Los Angeles Times, "Here's why Wells Fargo forces its customers into arbitration: It wins most of the time."

Plus, Wells Fargo is Trying to Bury Another Massive Scandal. Wells Fargo rigged the timing of when its customers were hit with overdraft fees, to maximize the penalties they had to pay the bank. This is an extremely profitable form of deception and fraud. A recent report found that since 2009, only 215 of Wells Fargo's customers pursued claims against the bank in arbitration. During that time, Wells Fargo created over 3.5 million fake accounts. Forced arbitration is not just another way of resolving disputes. In the real world, it usually stymies victims from getting any justice at all.

Marine Corps vet based in Arkansas:
Forced arbitration is un-American


"The lenders, big banks, and huge corporate employers take away the constitutional rights of military and millions of other Americans to go to court. Corporations also tell their own customers that they can't band together against them in class actions. Instead, individuals must go to a secretive process called arbitration, run by a private arbitrator who makes the decisions and likely receives repeat business from the big corporations. It is as unfair as it seems. This is an un-American way for us--military, civilians, and big business--to civilly resolve disputes. The U.S. Constitution provides the right to access open, public courts in our state and federal systems. And we should not be denied the right to use them."

Washington Post: Republicans are working to keep you from your day in court

Baltimore Sun - Op-Ed: Even if you win in arbitration, you still lose

The Consumerist (published by Consumer Reports): Don't strip consumers of their right to a day in court What did Republicans say about arbitration before, when they were granting car dealers a special exemption from forced arbitration?

Republican Senator Chuck Grassley, Chairman of the Senate Committee on the Judiciary, presented a bill in Congress to restore car dealers' freedoms, so they could sue giant auto manufacturers in court. Then, he said:
"When mandatory binding arbitration is forced upon a party, for example when it is placed in a boiler-plate agreement, it deprives the weaker party the opportunity to elect another forum. As a proponent of arbitration I believe it is critical to ensure that the selection of arbitration is voluntary and fair. The purpose of arbitration is to reduce costly, time-consuming litigation, not to force a party to an adhesion contract to waive access to judicial or administrative forums for the pursuit of rights under State law."

"This legislation will go a long way toward ensuring that parties [car dealers] will not be forced into binding arbitration and thereby lose important statutory rights. I am confident that given its many advantages arbitration will often be elected. But it is essential for public policy reasons and basic fairness that both parties to this type of contract have the freedom to make their own decisions [whether to sue or not] based on the circumstances of the case." -- Senator Chuck Grassley, (R-Iowa)

Source: Statements on Introduced Bills and Joint Resolutions, United States Senate, June 29, 2001.
What happens in arbitration?
Here's what happened to one consumer, Jon Perz, who was forced to surrender his rights when he bought a used car from a car dealership in San Diego, CA. Businesses often claim arbitration is quicker than going to court. But because of forced arbitration, he had to wait over 8 years to get justice. Meanwhile he couldn't drive his car because it was too unsafe.

Many more people have had nightmarish experiences because of forced arbitration.

Debbie not only lost in arbitration, but she and other students were ordered to pay $350,000 in the college's attorney's fees.
"Debbie graduated with a degree from a major university in Cellular Biology/Physiology. She wanted a career caring for people and decided to further her education so that she could become a surgical technician. Lamson College, a local school in Tempe, Ariz. owned by Delta Career Education Corporation, seemed to be a good fit because it claimed it had an accredited program and made many promises about the demand for its students upon graduation. But as Debbie reported, during an informational session, potential students were pressured to apply on the spot and many signed the papers they were handed. Little did Debbie and her fellow students realize that they had signed away their ability to hold Lamson accountable and keep their finances safe."

A Soldier returns from duty, and finds his job is gone.

Javier served our nation proudly. Then his employer refused to re-hire him - violating the law.
This is illegal. But forced arbitration keeps our military heroes from getting justice, or their jobs back.

"It's hard to imagine a group of Americans more deserving of our protection than the servicemen and women who protect our country. Javier, an Army Reservist from Florida, is one of them. But Javier – like too many others – was a victim of something called forced arbitration, and the fact that he served our country apparently made little difference to those who employed him."

Forced arbitration harms our nation's military heroes and their families